The sun has set nearly 12,000 times since I was here on this planet. And if something as ubiquitous as a sunset were to knock my breath out, imagine how spectacular it has to be. Spectacular it was, I found myself one December evening, standing wide-eyed and open-mouthed, basking in its orange glow, with the wind in my hair.

While on a couple’s trip to California, we stopped at a view point along the picturesque 17 mile drive in Pebble Beach. Racing against time on one of the shortest days of the year, we hardly made it through the travelers flocking along the route. Panoramic views of a beach covered in pebbles and rocks flew past us. The evening was slightly chilly but nothing could dampen the beauty that was presented before our eyes. Nature put on quite a show for us that evening, culminating in a memorable sunset.

It was a theatrical ensemble of colors. The blueness of the sky still lingered, being swallowed by embers casting an orangish glow. The horizon looked like the middle of a rainbow where the colors of the spectrum merged. The dark green trees almost gave in to the encroaching blackness. In the middle of it all, was the disappearing fireball which clearly stole the show.

The sight was one for the archives, with the sky in beautiful shades, the waves crashing against the rocks, the sea sprawling out as far as the eye could see and the coast lined with cypress trees. It was like a perfectly choreographed performance by the elements of nature, adorned with colors of the rainbow.

If there’s ever a moment when I felt one with nature, it was this. I just sat there and took it all  in. The innumerous pictures we clicked that evening doesn’t even compare to the image I captured in my mind’s eye.

Thus mesmerized, my mind failed to fixate on one single emotion out of the myriads running through me. What started as awe turned into amazement, then to wondrous joy and finally contentment. As if nature was telling me that, maybe, what I have right now, is just enough.

Perched on one of the rocks, glancing sideways at my better half who was maneuvering to capture the perfect shot, I was..content. With life. With everything. Everything felt perfect. All what I aspired to be and longed to accomplish was what I had in life right now. Everything was just as it was meant to be. No more, no less.

While I left the beach with no halo around my head, those few minutes were pure bliss. Turns out, the feelings don’t accompany us. Whatever we felt, we leave it right there and walk away with just the memories, like mere mortals. No enlightenment whatsoever.

But look at us – Nirvana right there! 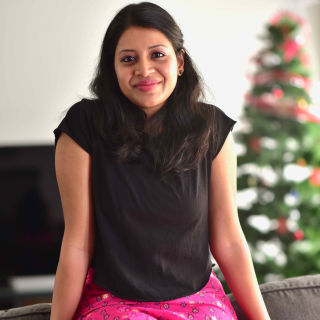